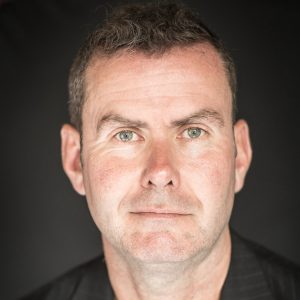 Ian was born in Zimbabwe and lived both there and in South Africa for several years before moving to the UK.

After training as an actor at the Royal Welsh College of Music and Drama, he worked professionally for some time appearing on stage, TV, radio and in numerous voice-overs. He then switched direction and became a stand-up comedian working in clubs in Manchester and on Live TV before realising that he enjoyed writing jokes a lot more than delivering them. He therefore became a full-time writer – creating his own series, in animation, comedy and drama as well as working on long running programmes both in prime time and for children. He is looked after by Laura Rourke at Independent Talent for script work.

He has recently returned to acting after a lengthy absence (last seen removing his trousers on Mike Bassett Manager on ITV) and can occasionally be heard on a number of Southern African voice-overs. Some years ago he branched out into production and direction and he is currently in demand for corporate writing work. In a bid to escape his desk, he frequently delivers workshops and lectures on scriptwriting and drama across the world,

His work with the International Schools Theatre Association has seen him visit just about every corner of the globe, working with young people and their teachers as well as spending ten years on the board of trustees and standing as Vice President. He was subsequently appointed an honorary life member and served as the Assistant Executive Director for five years.

He has worked with students at a number of British universities at both undergraduate and postgraduate levels and now travels the world delivering teacher and student workshops and has developed a series of online, screenwriting training.

When not working or spending time with his family he runs a lot and plays far too much tennis.