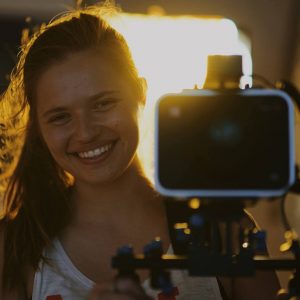 Madi Boll is an ISB class of 2016 alumni and recent graduate of the USC School of Cinematic Arts where she studied film and television production.

Madi’s love of filmmaking started at age 11 after creating a short documentary exploring the life of her younger brother Braden who has profound autism.

She has presented on filmmaking at several international conferences and had several short films play in festivals around the world.

Madi is currently working as an assistant at Proximity media, a company founded by Black Panther director Ryan Coogler, where her day-to-day is involved with orchestrating films like Space Jam 2, Creed III, and television for upcoming Marvel projects.

Imprint by Darcy
Scroll to top